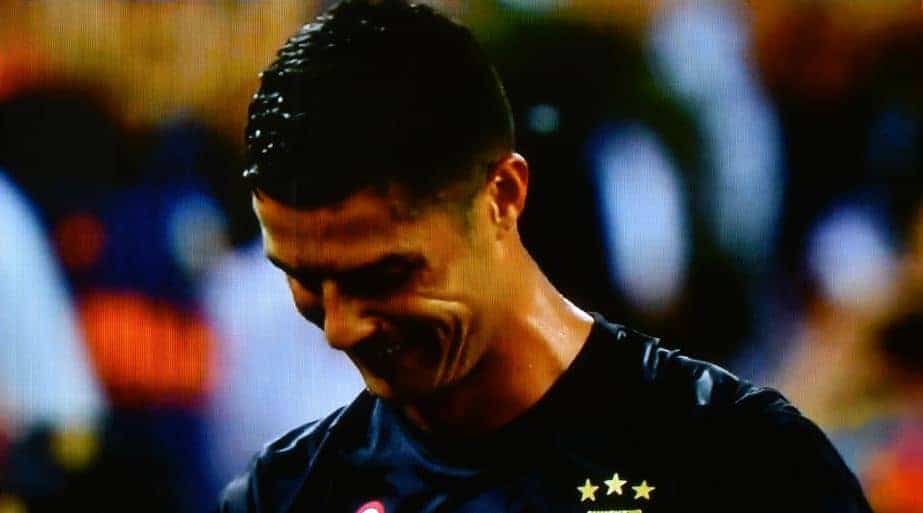 The Portuguese was dismissed at 29th minute  in the first UEFA Championship group match against Valencia, for allegedly pulling Murillo’s hair when he appeared to be make a gesture, asking Valencia man to get up after they had clashed on the edge of the box.

German referee Felix Byrch took the word of his goal line assistant and brandished the red, which left a bemused and frustrated Ronaldo in to tears while leaving the field.

Should the former Manchester United be given a ban of at least two matches for his confrontation with Jeison Murillo, then he’d miss the upcoming European games at home to Young Boys and away at the Red Devils.

This was the 11th red card of his career and his first in the Champions League in 154 UCL matches. Previously, he had been sent off four times with Manchester United and six times with Real Madrid. It was his seventh straight red and the quickest so far, coming after just 29 minutes.

UEFA have opened disciplinary proceedings over Ronaldo’s red card — but he will not find the result till next week.

What does it mean?

Ronaldo gets an automatic one-game Champions League ban, meaning he definitely misses Juventus’ home game against Young Boys on Oct. 2. The case will be dealt with by the UEFA Control, Ethics and Disciplinary Body (UCED) on Thursday, Sept. 27. It will then be announced exactly how many games Ronaldo will be banned for.

If Ronaldo’s behaviour is adjudged to be overly aggressive then UCED could ban Ronaldo for an additional one or two matches. This would mean he could miss one or both of the games against former club Manchester United on Oct. 23 and Nov. 7.

Ronaldo faces up to a 3-game suspension for his red card today, meaning he could miss both games against Man United. pic.twitter.com/XY5FrGWflW

UEFA is believed to charge is purely in relation to the red card and not the time it took him to leave the field of play. As such it is highly unlikely that Ronaldo will receive any extended ban on top of the automatic one-game suspension. The controversial red card  which made the fans and experts of the game equally furious, is unlikely to be reverted back. At the same time, it made a strong case for VAR to be introduced in the elite tournament, which lost its one of the biggest star, as a result of a poor  judgement from match official.

No. Ronaldo will now miss the Young Boys game regardless. There is no right of appeal against “an automatic one-match suspension following a dismissal” in UEFA competitions as shown in regulation 61.1.c.

However, if UCED does give Ronaldo any additional games then Juve could appeal against that portion of the suspension. They will have three days to lodge the appeal after the decision is handed down next Thursday.

Cristiano Ronaldo is reportedly willing to take a big pay cut to leave Manchester United this summer. The Portuguese star is desperate to leave Old Trafford this summer after growing frustrated with the club and is willing to […]

Marcus Rashford had a poor performance last season, especially when Manchester United slides to their lowest ever Premier League points tally.  The 24-year-old believes that having a new manager in the Club will bring refreshment to […]

Major League Soccer side Inter Miami have reportedly made an astonishing move to sign Manchester United’s want-away striker Cristiano Ronaldo. The Portugal international could be on the move this January after courting controversy and the […]